Who Invented the Pogo Stick? Posted in: Outdoors

Pogo sticks have evolved from the time it was invented, and to what it is now. Nevertheless, children and adults alike enjoy pogo sticks for recreational and sports activities. This is all thanks to Geroge Hansburg!

George Hansburg was born in 1888, and he is credited for inventing the pogo stick in 1909. Ten years later, in 1919, his design over the pogo sticks was patented. Before 1919, or before pogo sticks were patented, Germany was already manufacturing these gravity-defying sticks. In this article, we’ll talk about the evolution of pogo sticks from its creation to what it is now.

Even George Hansburg is clouded with mystery and spun a tale behind his creation. Hansburg claims that the inspiration behind the pogo stick came when he visited Myanmar. There, he met a farmer who made a contraption made of wood and rod.

On the other hand, other sources claim that pogo sticks originated from a blacksmith somewhere in the Transylvanian village. Regardless of which tale is correct, there remains a consensus that pogo sticks were initially invented to let people cross muddy places without getting mud on their feet.

Hansburg also owns his company, SBI Enterprises, and supplied stores with the infamous Master Pogo. This sparked the 1920’s pogo craze and became famous for more years to come. When Hansburg sold SBI Enterprises in the 1970s to Irwin Arginsky, the company continued to produce pogo sticks.

Safe to say, pogo sticks never went out of fashion even until now. If any, people have innovated the way pogo sticks since 1909 up to today’s century.

What is a Pogo Stick?

Pogo sticks are popular devices to let people jump off the ground, with the aid of a spring or other high-performance technologies. Most pogo sticks are often used as equipment for extreme sports, exercise, or for playtime. It can launch people off the ground up to several inches or feet in the air, depending on springs recoil.

The general build of pogo sticks is simple and consists of a single-pole that has a handle on top. There’s a footrest on the bottom and spring located along the pole. Pogo sticks are generally easy to use, and a person merely places his feet on the footpads and balances on it. To enjoy it, people jump as high as they can, and the pogo stick springs from the ground up.

How Pogo Sticks have Changed through time

What used to be for recreational activities, pogo sticks, have now become a thing even for extreme sports. Its original body is upgraded so that the basic design is innovated for extreme sports. Spring recoil is usually updated so that it could launch the jumper higher than usual, without putting any risks involved.

There’s a lot of science that goes through crafting pogo sticks. For one, weight plays a lot of consideration, and some pogo sticks may have a weight limit. Luckily today, new pogo sticks can accommodate people with higher weight without putting any risk on them.

Thinking of the amount of force necessary to launch up in the hair can be challenging, especially when you think of the risks involved. But many robotics companies upgraded the way pogo sticks are used. In 2010, the Guinness Book of World Records reported that Dan Mahoney set the bar by jumping as high as 9 feet and 6 inches.

Now, pogo sticks are used for both sports, recreational, and extreme activities. It’s a great piece of equipment to have around. Who’d think that a single-pole could pack a lot of fun that can get your heart pumping for hours and days?

Thanks to George Hansburg, pogo sticks were invented. What started as an innocent useful tool for many villages, eventually emerged as a piece of equipment that’s loads of fun to use. 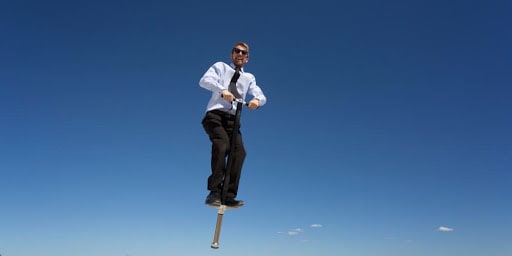